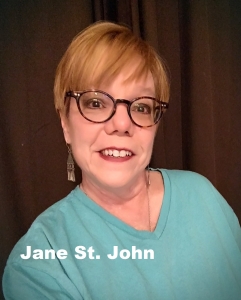 Jane St. John developed a love of classical music when a magical piano fairy left an ancient Schilling & Sons upright grand and a handful of albums from the Walt Disney Great Composers series in her living room. Despite being crushed by not receiving the newest Partridge Family album, Jane became smitten with Haydn and his “Surprise Symphony” when she realized she and Pops shared a wicked sense of humor.

With a father in the aviation industry, Jane spent her youth on the move, spending time in Oklahoma, Georgia, Michigan and California before her family finally settled down on the Texas gulf coast. It was after hearing Jane Dornacker give a traffic report on KFRC in San Francisco that OUR Jane got bitten by the radio bug. While working on a degree in radio and television communications, Jane landed her first on-air position in 1984 at the local classical public radio station in Corpus Christi, Texas. That led to other on air positions in a variety of formats for several years.

The Land of Enchantment first called to Jane in 1997 when she moved to Santa Fe and began a new career in the world of television advertising sales. After returning to Texas for a while to be closer to family, Jane and her wife, Peg, finally pulled up stakes in the Lone Star State in 2015, and moved to New Mexico, making their home in Sandia Park. “We wanted to live in the East Mountains from the get go,” Jane explains. “I can see Santa Fe from our front porch. After living the Dallas-Ft. Worth area for over ten years, both my wife and I just wanted to see mountains and sweeping vistas. My wife is a pianist and composer, and she finds great inspiration from our little slice of heaven over on ‘the green side.’ We’re both in a period of transition and personal growth, and at this point, we’ve both realized that we need to pursue that which makes us happy. For me, that call has always been radio, and since my very first on air position was at a classical non-commercial radio station, being hired by KHFM feels like coming home.”